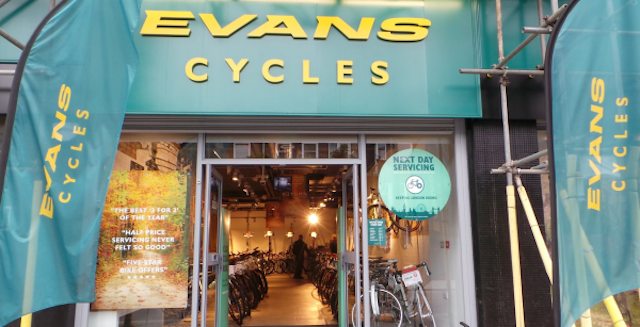 Struggling U.K. retail chain Evans Cycles has been acquired by Mike Ashley’s Sports Direct. Ashley is threatening to close at least half of the 62 stores in the cycles-only chain, with a possible loss of more than 500 jobs.

Earlier in the month, both JD Sports and Sports Direct were reported to have tabled offers for Evans Cycles, and rival Halfords had also been sniffing around. There were also deals on the table from 11 other interested parties.
Ashley also owns Newcastle United Football Club. He recently acquired House of Fraser when it went into Chapter 11. He also acquired Evans Cycles this way after a bidding war failed to find a buyer and the firm was put into Chapter 11.
“We are pleased to have rescued the Evans Cycles brand,” said Ashley.
“However, in order to save the business we only believe we will be able to keep 50% of stores open in the future. Unfortunately some stores will have to close.”
Evans Cycles was founded as F.W. Evans Cycles in 1921 with a store on the Kennington Road in south-east London. The business was purchased by Joseph Smith in the 1950s, and it stayed in the Smith family for the next sixty years. ECI Partners refinanced the business when it acquired the chain in 2015.